For years scientists have been trying to unlock the mystery of how human beings evolved such sophisticated and large brains. The prevailing theory for a long time has been that consumption of energy dense animal flesh (meat) freed up more energy for the brain to use. This lead to many health enthusiasts to develop and adopt what is called the “Paleo Diet” — a diet consisting mostly of meat and vegetables, with no grain, beans, or dairy, and very little fruit. 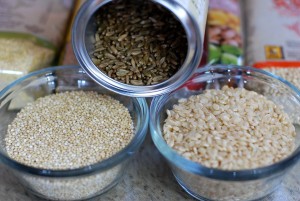 However, this theory ignores a very basic fact of human physiology — the brain runs exclusively on glucose. It literally cannot use another energy source. And glucose is only found in plants (with the exception of lactose in dairy milk), in the form of complex starches in grains, beans, and tubers, and simple sugars in fruit.

And while technically those on a low-carb diet can convert some fats and proteins into glucose for their brains to use, it is very inefficient, and would not easily supply the large amounts of energy the brain needed to evolve and grow to its current size.

Simply put it is highly unlikely that early humans were following any version of a low-carb diet. In fact it would appear likely that humans evolved their large brains in an environment rich in carbohydrate energy, and a new study just published adds to this theory in a big way.

The study, published in the Quarterly Review of Biology, proposed 5 facts that support their hypothesis that cooked starches (tubers, potatoes, grains, etc) and other carbohydrate foods were instrumental to the development of our higher brain capacity. The 5 factual observations are the following:

Cooking starches freed up massive amounts of energy, in the only form the brain can use — carbohydrates (glucose). This influx of energy would have been necessary to develop and evolve a much larger and more powerful brain.

You were meant to eat starch.

Eat the diet we evolved to eat. Follow the true Paleo Diet — one based on high-carb, low-fat starches, like potatoes, beans and legumes, rice, wheat, corn, barley, and quinoa. Round out your diet with fruits and vegetables.

In fact, all large, successful populations of human beings have survived on a diet based on starch, from rice in Asia to corn in Central America to wheat in the Middle East to potatoes in South America.

For more on the real story behind starch and its importance to human health and evolution, read the groundbreaking book by Dr. John McDougall called Starch Solution.

Starch need not be vilified but celebrated for the key role it played in human evolution. You have your big powerful brain to thank for it!

What You Learn When You Go Vegan For One Month This Is How You Do Bad Science — Saturated Fat NOT Linked To Heart Disease!