Seven days ago my father and I loaded up a Dodge Minivan with all of my worldly possessions and we set off across the country, driving from Washington, D.C. to San Francisco, California.

There are several routes you can take, the most common (and quickest according to Google Maps) is the northern route — through Chicago, then Nebraska and Utah and eventually to California.

I’ve driven several stretches of this route many, many times, so we opted to go the slightly longer Southern route.

This took us through the great state of Tennessee, across Arkansas, through Oklahoma, and criss-crossing the hot desert heat of New Mexico and Arizona.

While this route took us to states I’d never been and places I’d never seen, one thing I didn’t consider was that it was likely the far less “vegan friendly” route.

I mean — the South isn’t exactly known for their plant-based cuisine.

Let me just say that 2016 is a great time to be vegan. Through the assistance of the app Happy Cow, we had little trouble finding vegan food in any of the major cities we passed through. The smaller towns were tougher, however we got a nice assist from Yelp. So let’s take a look at what we were able to find out there on the open road:

Our first stop was a Greek cafe in Lexington, VA called “Niko’s Grille.” We found this spot with the Happy Cow app and it was a great first meal! They had listed on the menu a vegan sandwich that was super tasty. I always appreciate when a menu flat out labels something as vegan, no need to ask for special requests or how it was prepared!

For dinner we stopped in a tiny little Tennessee town, also at a place we found on the app. They had a separate vegan menu, a surprise for a town of less than 5,000 people! Delicious food too. 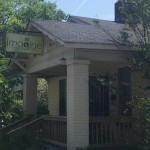 For lunch we stopped in Memphis, Tennessee, a town known for their barbecue. Finding a vegan option felt like a tall order, but we ended up finding what was, for me at least, my favorite meal (and restaurant) of the entire trip! 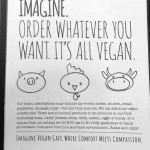 I cannot recommend highly enough Imagine Cafe in Memphis, TN. A fully vegan restaurant, they made a killer vegan barbecue sandwich platter, and the atmosphere of the whole place was just awesome! This was the only fully vegan restaurant we found on the entire trip, and I can’t tell you how nice it is to have an entire menu to choose from. Definitely check this place out if you’re ever on your way through Memphis.

For dinner we leaned on Yelp to find us Happy Cafe in tiny little Henryetta, OK. I
ordered the orange tofu and the cook who made it personally came out to ask me how it was, I suspect because not many people in small town Oklahoma are ordering the tofu dish! Well she was pleased to learn that it was delicious!

We stopped in Amarillo, TX for lunch on day 3, and Happy Cow couldn’t find much for us, so we went with the old reliable, Chipotle, for lunch. One of my favorite restaurants, because not only is it delicious, but it’s uber easy to order vegan!

For dinner we stopped in Gallup, NM for our most interesting restaurant of the trip — an Indian restaurant at a truck stop! Not what I expected to find at a truck stop, but they were more than happy to make me a vegan chickpea dish that was delicious! We found this hidden gem with Happy Cow as well.

Since we were making such good time and were ahead of schedule we decided to take a few hours off driving and go for a hike in Flagstaff, AZ. We bought some PB&J supplies and had a picnic on the trail. PB&J is one of those meals everyone forgets is vegan when they say “I don’t like any vegan food!”

And for dinner we stopped in Barstow, CA at an authentic Mexican place! Happy Cow gave us no listings, so I had to rely on a trick with Yelp that’s helped me out many times in a bind. For any restaurant you can search keywords in their reviews. I knew we wanted to find authentic Mexican, so I picked a few spots and searched for the word “vegan.” For Lola’s I found a review that someone had posted about how they were more than happy to accommodate and make her a vegan meal, so I walked up confidently to order, and voila — a vegan burrito was delivered and it was delicious!

We routed through Mountain View, CA for lunch so we could stop at Veggie Grill — the all vegan fast food chain! It’s always fantastic — I can’t wait for it to expand nationwide.

And for dinner we ate at Plant Cafe on the Embarcadero, right next to San Francisco Bay, a perfect end to a wonderful (vegan friendly) road trip through the south!

Download Happy Cow today, and don’t forget that Yelp trick! If I could find a tofu dish in Henryetta, OK, you truly can eat vegan anywhere in the country! You just have to be willing to put in a little research 🙂

Low-Carb is Healthy? Low-Fat is Unhealthy?? What It’s Like To Have Vegan Friends