I Stopped Eating Salt For One Week. Here’s What I Learned

I’m not sure why, but I am really drawn to dietary experiments.

I find them really fascinating. I think it’s really powerful to, instead of contemplating how a dietary change may affect your health or your weight or your bottom line or your taste buds, to simply do it.

Each time I started with trial periods. I just did it.

Sure I had thought about some of the changes before taking action. But at the end of the day, taking the leap was far more powerful — and taught me more — than any amount of thinking ever could.

So with that in mind, I recently embarked on a one-week trial of a completely salt-free diet.

Why did I want to test this out?

Well I work with people who weigh-in everyday, and one thing I’ve noticed is that their weight tends to fluctuate a decent amount from day-to-day. It depends a bit on the person, but some people can change as much as a few pounds every single day. Up one day, down the next, then up a bit. It’s this vicious cycle (when you’re not used to it) that stresses people out when they start tracking their weight.

Yet tracking your weight is so important to weight loss and weight maintenance. And what is ultimately going on here is not changes in fat, but changes in water retention.

One of the big culprits in water retention is the amount of sodium we eat.

So, I entered into this experiment hoping to learn about how sodium affected my daily weight.

But I also wanted to learn more. Many followers of a whole foods plant-based diet also follow a “No S.O.S.” diet, which means no added salt, oil, or sugar to their food.

I posted last week about my feelings on this practice.

In short, I personally don’t add oil to my food. The only sugar I add is some maple syrup to my oatmeal and have sugar in the occasional vegan dessert or some processed cereal as a treat.

But I’ve never explored salt. Ever. I’ve literally never even thought about it, except to feel that by avoiding most processed foods and all animal products, and staying hydrated, I’d be fine. Salt was not a worry.

A few months ago I saw a YouTube video by a vegan who ate no salt in her diet. Her video was on the opposite experiment to mine — she added salt to her food for one week. And in that week she noted feeling bloated, fatigued, and having headaches.

Was I having these symptoms without noticing simply because I’d never gone salt-free? I was reminded of going plant-based — before I ate this way I had no idea I could feel this good, this energized.

When you eat a Standard American Diet you really don’t know what healthy feels like. It’s only when you have that feeling that you realize how awful you felt in the past.

Was the same true about salt? I had to find out.

I tracked my weight for the week leading up to the experiment so I would have baseline data. How did my weight fluctuate on my normal salty diet? 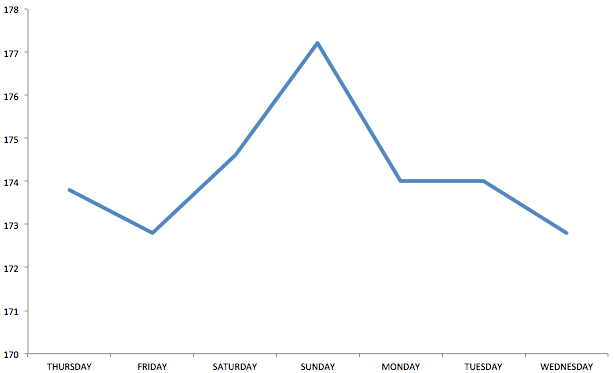 As you can see from the graph, my weight fluctuates a decent amount during the week.

In my baseline, my lowest weight was 172.8 on Friday, and highest was 177.2 on Sunday. [NOTE: Research has shown that people are, on average, their lightest on Friday morning, and their heaviest on Monday morning. We tend to indulge on the weekends…]

Well I wasn’t in any hot dog eating contests that weekend, so…no.

It was changes in water weight!

Here’s a look at my salt-free week weights: 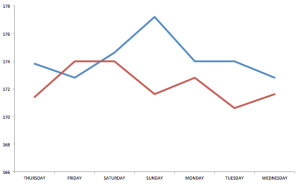 The red line on the graph is my salt-free week. Notice how on average I am below the baseline week.

On the weekend my weight is still the highest, but after that the line trends downward.

[A note about that — on Thursday of that week I hung out with a friend and we went to Chipotle, where it is physically impossible to order anything without salt, so this day was not salt-free. More on that in a second.]

That’s 2 pounds lighter! Of course that is changes in water weight, not fat, but it is still less weight that I am carrying around, and a tighter look to my physique.

How Did I Feel?

Besides being down 2 pounds on average, did I notice any change in how I felt? Was I noticing less fatigue, feeling less bloated, noticing a clearer mental state?

Overall I’d say… sort of. I don’t think there was any profound changes in mood or energy level, but I will say that I definitely felt lighter. Not just because I was carrying around 2 lbs less water, but just in general I felt maybe a lightness of mood and mental clarity. I won’t call this definitive, but definitely plausible that going salt-free lead to this outcome.

How Did It Taste?

This was my biggest concern — taste.

Salt is just delicious, plain and simple. There’s a reason we add it to our food. And to be fair to salt, it is absolutely necessary for bodily function. The problem is we simply eat too much of it, and too much salt leads to higher blood pressures and greater risk for heart disease.

In fact the American Heart Association recommends we stick to less than 1500 milligrams of sodium per day. Your average American gets 3400 milligrams per day — or more than double the AHA recommendation!

But how did my food taste?

Probably the most interesting result of this entire experiment was that my hunger was reduced by eating salt-free. One of my go-to lunches is brown rice, chickpeas, carrots, kale, nutritional yeast, and soy sauce. The soy sauce-nutritional yeast combo gives it a nice cheesy taste and it’s pretty irresistible. I usually polish of a giant bowl of it and still feel like I could eat more.

All week I made this same lunch minus the soy sauce, and even though the quantity I served myself was the exact same, my desire to finish it diminished drastically.

With the salt, I craved the next bite. The salt fueled my appetite.

Without the salt, I lost interest, and my appetite faded quicker. I still finished my meal, but it took me longer, and I was less satisfied. It still tasted alright, but it was far less “craveable.”

Now for someone hoping to lose weight, that is a very great thing! Eating more slowly no doubt leads to more of a feeling of fullness. And reduced appetite is obviously helpful for losing weight!

For someone hoping to simply enjoy their food, it may not be so welcomed. The one major caveat is this — when reducing salt it is highly recommended that you go down incrementally over the course of a few weeks. Your taste buds will adjust if you decrease incrementally. If you go from full salt to no salt overnight like I did, you may find your food tasting a little on the bland side.

What Did I Give Up?

One thing I noticed was how salt lurks in so many things you don’t realize!

I knew I wouldn’t have any potato chips this week, or use any salt in my cooking. But I roasted up some potatoes and realized I couldn’t have ketchup with them — plenty of salt in there.

I had some beans but couldn’t add salsa, no way!

I even grabbed a box of Kashi cereal that had no salt, but couldn’t add my almond milk because lo and behold — added salt!

I finally found a Westsoy Soy Milk product that had no added salt — just soybeans and water — so I used that.

Salt is in everything.

Another thing I had to give up was eating out. Except for that trip to Chipotle.

This was another profound realization of this experiment.

I have a hard enough time eating out as a vegan. Well really it’s not that hard — I’m used to it and know how to do it (reading menus ahead of time, having a plan, etc).

It is impossible to eat out if you are trying to eat salt-free.

As my friend and I were hanging out and contemplating grabbing food, I realized there wasn’t a single restaurant I could choose that would serve me salt-free food, unless I ordered a salad with no dressing, and that didn’t sound particularly appealing.

The other thing I learned is that while my friends are used to me being vegan and give ample consideration for my need (thanks guys), suggesting we eat salt-free was just too much…

I offered to cook up a salt-free meal and my friend looked at me like I was from Mars.

So I caved and I had Chipotle, where it’s easy to be vegan but impossible to be salt-free.

That’s ok. It was part of the experiment. I learned a lot. If you want to cut salt, you cannot eat out.

My post Chipotle weigh-ins confirmed there was a spike in my weight for about 2 days, then back down.

Where Am I Now?

I learned a lot from going salt-free for a week. I learned how it is in everything, how eating out is impossible, how it contributes to holding onto water weight, how much my weight fluctuates in general, and how my friends are able to cope with my weird vegan diet but are simply not on board with me going salt-free completely!

That’s why I love dietary experiments!

You learn so much.

So, with what I’ve learned, how will my behavior change?

Well, I’m not sure I can quite answer this yet… What I do know is that today I am far more aware of the impact salt has on my weight and how I feel than I was a few weeks ago. I think I’ll still use store bought condiments — I currently don’t feel super motivated to make my own ketchup or almond milk on a regular basis. But I could go easy on the salt in the foods I prepare…

The next step may be to track the actual number of milligrams I consume everyday. I would wager that I average below the AHA recommendation of 1500 milligrams even with my soy sauce and store bought salsa and occasional trip to Chipotle. But regardless, going salt-free lead to a feeling of lightness and 2 pounds lost, so I can’t say that salt has no impact on me!

Armed with that knowledge, I think I’ll be much more aware of how heavy my hand is with the salt-shaker! And the lighter feeling is motivating…!

I Gave Up Salt For One Week. This Is What I Learned and How Much Weight I Lost. Diets Are Confusing. Just Do This ONE Thing For Optimal Health & Weight Loss!