If You Eat Meat, I’m Not Asking You To Go Vegan — Just Do This One Thing

I get it. As a meat-eater, going vegan just sounds impossible. If you’re even remotely interested in the first place, it just sounds daunting. (It isn’t as bad as you think, but not the purpose of this post).

So I don’t want to talk to you about going vegan right now. Cutting out ALL animal products might sound like I’m proposing you just stop eating.

I don’t want that, and neither do you.

So here’s my story. On Sunday, I was over at a friend’s house to watch football. Just me and a few other guys (all meat-eaters).

My buddy who was hosting was roasting a 10-pound ham. So you could say it was a relatively hostile environment for the vegan message. And of course, I didn’t preach.

I just did my thing.

I made guacamole, brought refried beans and salsa, and had a nice spread. And, I figured it was a good chance to expose these guys to some meatless stuff as well, so I brought a package of Gardein Crispy Chick’n Tenders.

As the ham roasted in the oven, right next to it were my Gardein meatless chicken fingers, cooking away.

Nice and crispy, I pulled them out of the oven and onto a plate with some ketchup and barbecue sauce. To the untrained, or even trained-eye, it looked like any plate you’d find in any home in America on Football Sunday. 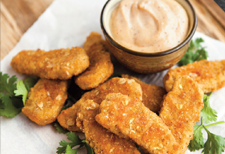 Without solicitation I had several friends come up and pop one in their mouths and then proclaim that they were “good.”

When they found out they were meatless they said, “you could fool anyone with those.” Another friend, who works at an elementary school said, “they should serve these at lunch, the kids would love ’em.”

Meatless As Good As Meat

And that’s what I am here to ask you to do. I don’t have to convince you of why you should be vegan. You can browse my other posts for that.

Just switch some of your meat meals to Gardein (or any other meatless product, though I tend to think they are the best out there).

That’s it. Easy switch. The stuff literally fools unsuspecting meat-eaters all the time. You WON’T notice the difference, I guarantee it.

My younger brother watched Cowspiracy (now on Netflix!) with us as a family, and overnight he and his girlfriend switched to using only Gardein for their “meat-based” meals. It was that easy. They didn’t go vegan and yet that one switch is making a HUGE difference.

Sure these meatless products aren’t “whole foods plant-based” approved. But is it healthier than actual chicken? Chicken that is full of antibiotics, industrial toxins, e. coli and salmonella and MRSA, and fecal matter? Pumped full of sodium as filler? Loaded with artery-clogging saturated fat and cholesterol?

Yes, yes it is healthier than that.

It has none of those things. It is better for the environment. And it saves chicken’s lives.

It’s an easy swap. I challenge you, the next time you are at the grocery store, hit up the frozen section and pick up some Gardein for the week. You won’t regret it, and any reduction in meat is an increase in health for you, the environment, and the animals. Win–Win–Win.

Does Meatless Monday Help? Only Vegans Save Animals!!! What’s Better: Pills or a Vegan Diet?